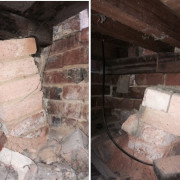 Not until a building inspection was performed on this house was the real condition uncovered. The house was presented beautifully. It had been renovated extensively. New kitchen, bathrooms, light fittings and garden. Except one thing had been overlooked, because when we entered the subfloor during the building inspection and crawled the dark spaces below, we uncovered that the renovation budget did not extend to the structural elements of the house. Structural components which were vital in supporting the floor and walls from collapsing. What we found was astounding. Structural brick piers (footings) that had collapsed, leaving the floor suspended in mid-air in places. The fact is, that if a building inspection had not been performed in this case, the buyer would have bought an absolute disaster. We estimate the costs could escalate to $30,000.
It’s worth noting that our client who commissioned the building inspection, was relieved, however there is a high probability that the person who ends up buying this house will have no idea about the disaster lying beneath the floor. Building inspections are worth their weight in gold and prevent financial disasters like this one.
Read more about our services here. Melbourne House Check conduct really thorough Building Inspections and can be contacted on 1300 729 352.