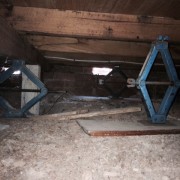 Are you considering buying a house? Does the house look like it’s in good condition? Perhaps you’re thinking twice about whether to have a building inspection or not. Well, believe it or not, in most cases when major structural defects are identified, they are found in houses that present beautifully from the outside. In almost all cases, major structural defects are concealed and if it was not for the building inspection, the defect would go completely un-noticed. The above photograph was taken in a subfloor after settlement at a house in Melbourne. This particular subfloor door was nailed shut, preventing access pre-purchase. It was only after settlement did the buyers commission the inspection wanting peace of mind. What was found was astounding. Four car jacks supporting the floor load in a section of the house that required restumping. This is a defective condition that is vital to identify before you purchase rather than afterwards. In another case this week in Melbourne we discovered a subfloor that was completely consumed by water, that had been leaking from the main shower. Considerable damage had been done to the structural timbers of the subfloor requiring major rectification costs.

Brad Aylett-Sloan from Melbourne House Check says “an increasing number of clients are contacting us post purchase. In most cases they have not commissioned a house inspection prior to purchase because of the rush of the sale process. We are continually identifying structural defects that have been concealed pre-purchase. It’s important for house buyer to realise that identifying major structural defects is not a simple task for non-professionals and that crawling under the floor and in the roof space is vital. Knowing what to look for is also a skill that only an experience builder has”

Melbourne House Check have produced an e-book that exposes 20 of the most common cover-ups in houses. It is a must have document for anyone considering buying a house. The e-book can be downloaded here.

Buying a House? Have a building inspection first.